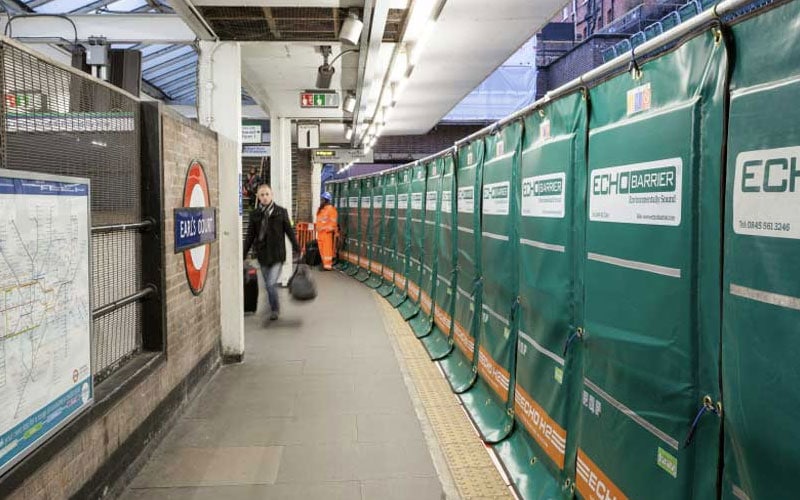 BBR explore solutions to the problem of excessive noise pollution

A new and highly effective solution to the problems of excessive noise pollution generated during rail works has now been included as best practice by Balfour Beatty Rail (BBR) on their London Underground rail replacement projects. In order to be a responsible contractor and neighbour, BBR were keen to proactively demonstrate a commitment to reducing noise levels on track renewal work. They needed a solution and following some market research, a ‘new and innovative’ product called echo H1 acoustic barrier from Echo Barrier was discovered. It offers an inert, safe and lightweight solution which does not absorb water, is easy to fit to heras fencing and is quick to install.

The echo H1 literally soaks up sound around it rather than reflecting it, attenuating noise by up to a remarkable 30dB. Echo Barrier acoustic barriers were used during works at Edgware Road with impressive results, leading BBR to conclude that their reputation had been directly enhanced as no complaints from residents were received. Balfour Beatty Rail said: “The Echo Barrier and what it allows us to do, has had a considerably positive impact on our reputation and on our procedures. It will prove a valuable asset moving forward in ensuring that we are able to respect the communities in which we do our work, and are able to work more efficiently and effectively.”

It is imperative that works happen when initially planned and are not rescheduled or held up due to issues such as noise. The echo H1 is weatherproof, fire resistant, lightweight yet hard wearing and also gives the opportunity for display of client advertising or branding. It can be rolled, which makes transport, man handling and storage very easy. Other uses for the product include construction site work, demolition projects, loading and unloading areas and to provide improved on-site staff welfare facilities.

We have hands-on experience on numerous sites throughout the country. Whether you need assistance to put your sites CNVMP into practice, or just practical noise attenuation advice, give us a call on 0800 666 647.

SFI regards safety and innovation as a paramount concern, and we don’t charge premium prices for our products. We constantly introduce the latest solutions in noise abatement and flood prevention to NZ. We are here to help and we have the experience to do so.